skip to main | skip to sidebar

It is now week 7 post op (10 weeks post the initial op) and physio and rehab are going well. I almost have full range of mobility at the shoulder (last few degrees of flexion and abduction are tight) although I still have some shoulder impingement. I can do most normal activities now, like driving a car... and have regained 3 kg's body weight (still 7 kg's to go!).
Apart from ongoing CV and leg strength training, my rehab includes shoulder mobility exercises 7 days/week, physio 3 days/week and heavy band strengthening 3 days/week.
Posted by Vern Neville at 22:57 No comments: 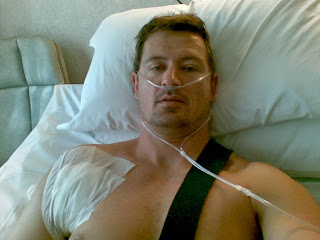 “A couple of weeks before the start of the 2009 European sailing season, America's Cup grinder Vern Neville tore his chest muscle which required immediate surgery and will rule him out for the majority of this season”
I tore a muscle in my shoulder (pectoralis major muscle) during a training session in April. A combination of being over-trained, pushing too hard and doing an unfamiliar exercise... As an athlete, one is always on the fine edge of over/under training and it is the ability to optimally manipulate ‘over reaching’ and recovery which leads to performance. I got it wrong... again!
I had surgery in Manchester (UK) with Dr Len Funk which required the tendon to be re anchored back on to my humerus (an anchor screwed into the bone of the arm) and the muscle sutured back onto the tendon. If that wasn’t enough, I got an infection in the repair and had to go back into surgery a week later, spend a few days in hospital on IV antibiotics, then back into surgery again.
The atrophy was phenomenal; I lost 10 kg’s during the first 4 weeks. But more than the atrophy, pain or discomfort, was the psychological impact of the injury... (I have a whole new appreciation for athletes who end up with career ending injuries!). After having taken most of 2008 off from sailing to finish off my Doctorate, I was really looking forward to getting back on the water and had a full season of sailing scheduled for this year. So, coming to terms with being ‘out’ for another year was pretty difficult to accept. But I’m determined to come back even stronger and hope to be back on the water again before the end of the year. Watch this space...
Posted by Vern Neville at 17:24 1 comment: