skip to main | skip to sidebar

Loughborough University: potential to be the best centre for sport in Europe

I am still training mostly at LA Fitness Loughborough and occasionally workout at Loughborough University PowerBase. Loughborough University sport has very few weaknesses and is considered the centre for sport in the UK with World class Olympic standard sport specific facilities for most sports, yet the strength & conditioning facilities are clearly outdated. Not only is the equipment outdated but there are insufficient machines to cater for the increased requirements of specific athletes/sports. With the Olympics only 2-years away, performance could be greatly enhanced by improved facilities! One only has to train in almost any USA University (or College) strength & conditioning centre to understand what great strength facilities could be. Understandably funding is 'tight' for educational institutions in the UK at the moment and there may not be funds available to invest in upgrading a S&C facility, however, in my opinion this could be a great opportunity for a commercial enterprise to become directly involved in the success of many of Brittons medal hopefuls; the opportunity to capitalise on the Olympic movement leading up to 2012 and to be involved in a lasting legacy. If the Loughborough University S&C facilities were state-of-the-art one would expect that the University would be able to attract more athletes and teams to Loughborough, and athletes like myself and others would thrive on training there. There is real potential to capitalise on the Olympics and to create a world class S&C centre at Loughborough Uni!
Posted by Vern Neville at 11:40 No comments:

After having taken most of week 8 ‘off’ from rehab and training, partly due to having been ill for 5 days and partly because I felt that I needed to psychologically remove myself from the injury for a few days, I feel great and back into full training now.
My schedule of Physiotherapy, Massage and Chiropractor is similar to previous weeks. I am now using the blue theraband for most of my rehab exercises and begun using resistance machines, such as: chest press, seated rows, shoulder press, lat pulldowns, biceps curls and triceps. I have also picked up the grinding intensity a little to ~140 W and have begun chest strengthening exercises (eg, cable presses and machine chest press) and chest proprioception exercises.
Posted by Vern Neville at 19:25 No comments: 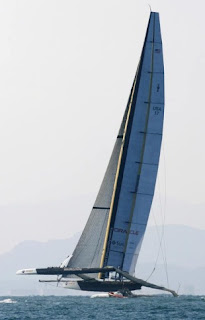 I have just returned from watching the greatest yacht race of our generation; the 33rd America’s Cup ‘Deed-of-Gift’ race in Valencia, Spain. USA is once again the defender of the America’s Cup! This was an amazing piece of history; the two most technologically advanced racing yachts ever built went head-to-head in a best-of-three series to decide who would defend the 34th America’s Cup. There are simply no words to describe... the BMW Oracle Racing trimaran was incredible – I was one of the fortunate few to have been invited onboard and was totally blown away with the engineering; the wing sail and the hydraulics control system were seriously impressive! The Alinghi catamaran was also an engineering masterpiece (although I only got to see it from the dock).
But the real talent was my good mate Jimmy Spithill; he steered the BOR ‘beast’ with perfection. Jimmy has got to be by far the World’s best match racing helmsman, in fact I have said many times before, he could have been a top pro athlete in almost any sport had he chosen!
Well done to Russell Coutts and all the BOR team for an amazing effort. Regardless of all the personalities, egos, legal battles and side shows, one has got to feel sympathy for Brad Butterworth, my good friend Jan Dekker and the Alinghi crew; it’s a hard way to lose the Cup!
I can only hope that the 34th America’s Cup is going to be the biggest and best America’s Cup ever, and of course, I will be ready. I’m feeling good!
Posted by Vern Neville at 03:18 No comments: